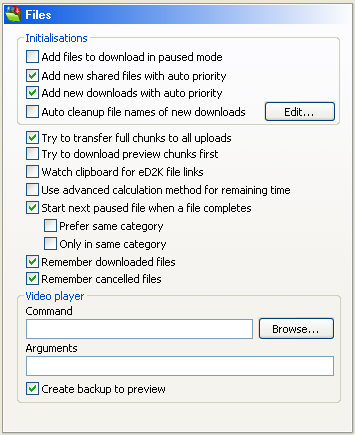 Add files to download in paused mode
When the download list already contains 20 or more items, this option comes in handy as all new downloads are added with a paused status rather than waiting status. This allows you to still queue files without overloading eMules connections. Also see Start next paused file when a file completes.

Add new Downloads with auto priority
Similar to the option above this one applies to files added to the Transfers list. According to the number of sources found for a download its priority will be adjusted automatically. .

Auto cleanup filenames of new downloads
This option automatically cleans up filenames whenever a new download is added to the Downloads list. Special characters like _ , . , [] are removed or replaced by a blank and the first letter of each word is capitalized. Further, special strings which can be defined using the Edit button are also removed from the file name. There are already strings defined which will be used but new ones can be easily added by using | as separator.

Warning:
Images for CD recording software often consists of more than one file, e.g. *.cue/*.bin (CDRWin), *.mds/*.mdf (Alcohol120%), *.ccd/*.../files/help/1033/*.sub (CloneCD), *.bwt/*.bwi/*.bws (BlindWrite). The option should not be used when downloading such files. Changing the filename will result in error messages when trying to burn them as the correct filename is also saved within these files.

If you change the filename anyway, it has to be replaced in the according layout files, too. For *.cue files this can easily be done with Windows notepad but the other formats mostly require some hex editor like UltraEdit or WinHex.

Try to transfer full chunks to all uploads
When turned on, this option tell eMule to upload until a chunk is completed. The advantage of this is that the availability of the files will increase as only full chunks can be shared. When releasing a new file this option greatly increases sharing efficiency. Using it is recommended in any situation, as it improves the quality of shares on the network.

Try to download preview chunks first
For the preview function to work the first and last chunk of a file have to be downloaded already. This option will try to get them first. It is not recommended to turn it on, as it will have negative effect on the availability and distribution of the files - the preview chunks will be distributed for more than the other chunks.

Watch clipboard for eD2k-filelinks
Copying an eD2k Link via CTRL+C from a website or any other source will pop up a message asking if this file should be added to the Transfers list.

Use advanced calculation method for remaining time
This will affect how eMule calculates the time remaining for a download. The default method is based on the current download speed for this file, whereas the advanced method takes the average speed since adding this file into account.

Start next paused file when a file completes
If a file is completed and you have paused files in your download list, one of them is automatically resumed. Pausing files or adding files in paused mode together with this function will care for a constant amount of sources (for normal DSL it should not go far above 3000) without slowing eMule down due to connecting too many sources.

Remember downloaded files
This option affects how search results are displayed. Every file that has been already downloaded or has been cancelled will be displayed green in the search results. Also a new column is added to the results, which shows whether the file was cancelled or already downloaded. This option is useful to keep track of similar files. It works even when the file is no longer shared or has been moved to another folder.

If this box is empty, eMule will use the default media player associated with the filetype you are trying to preview. If a path to another player is specified here, this one will be used instead. Usually most media players need a temporary file as they do not handle the gaps in unfinished files very well. If a default player is used the box Create backup to preview should be checked. A video player which does not need this temporary file is VLC media player which could be used to preview files from eMule instead of the default player.