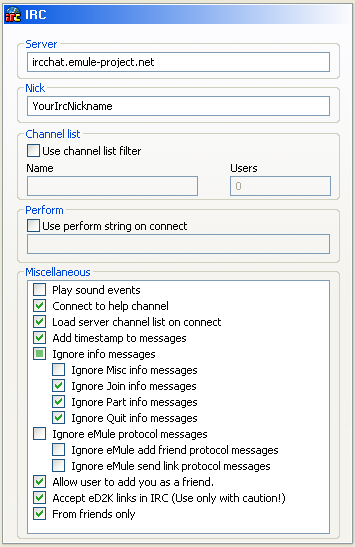 The default and official IRC network is irc.mindforge.org. The projects IRC network can always be reached through the ircchat.emule-project.net address.

Specifies a different nick name for IRC than the one entered in General tab. You are kindly requested to choose your own nickname instead of the default when connecting to IRC. This helps channel volunteers help you, by not having dozens of identically-named users online. Please note that some nicknames may be reserved on the MindForge network - you'll be notified of this by the NickServ bot. If you receive such a notification, change your nickname by typing /nick AnotherName, where AnotherName is your new nickname.

Use perform string on connect
This options allows a specific actions to be carried out on connect. Multiple commands can be chained using the pipe character '|'.

This perform string will send the password ([pwd]) to NickServ which authenticates your use of of a registered nickname. Then it will automatically join the channel #emule.

Play sound events
This function is known from the mIRC client. It can be used to play sound files which more users in a channel may have. Sounds for the IRC must be placed in eMule's installation folder in the subfolder SoundsIRC. Only *.wav files can be used. This feature may severely annoy other users, especially in large channels. Use with care or you may be heading for a kick or ban. You are kindly requested not to use this command in the official eMule IRC channels.

Add timestamp to messages
The current time will be displayed in front of each irc message, allowing you to easily trace back when something was said.

Ignore eMule protocol messages
eMule's IRC client can be used for various eMule specific tasks, such as adding friends and sending eachother eD2K File Links. You can choose to disable these features by enabling these options.

Allow user to add you as a friend
The eMule IRC chat allows users to add friends directly from the nick list using the right mouse button. Removing the check will deny the request to be added to the friends list. The users trying to add the friend will receive no message when denied.

Accept eD2k links in IRC
If enabled this function will automatically add all posted eD2k links in a chatroom directly to the downloads list. To avoid gathering unwanted links it should be used together with the From friends only option.

From friends only
If this one is also turned on links will only be accepted from users who are added as friends in eMule's Message Window.