Remove dead servers after [n] retries
When a server does not correctly response to a status query it is counted as a failed attempt. After [n] failed attempts the server is deleted from the list on next query.

Auto-update server list at startup
The addresses.dat is located in emuleconfig folder. This file can be edited by pressing the List button located in Options->Server. Enter a valid URL to a server.met and save the file. If this option is checked eMule will update its server list from the URL provided in the addresses.dat at start up. The file will accept multiple URL's, but only the first valid URL will be used.

Update server list when connecting to a server
eDonkey servers know of each other to a certain extent. With this options eMule will retrieve the list of known servers from the server it is connected to.

Update server list when a client connects
This feature works upon the connection of another eMule client to your client. Both clients will compare their working servers and update their lists accordingly.

Use smart LowID check on connect
If you once had a high ID this function assumes that you have configured everything correctly and so disconnects eMule if a server gives a low ID without reason. If you receive 3 low IDs in a row you will get classified as low ID user until you get a high ID again.

Safe connect
eMule asks two servers simultaneously for connection to speed up the process. When Safe connect is on, only one server will be asked to minimize the chance for low ID. Usually not needed. Note that eMule still keeps the connection to one server only.

Autoconnect to static servers only
Context menu in the server list allows to add servers to the staticservers.dat located in the emuleconfig folder. This list will be automatically loaded on eMule start up. Only add servers with static IP or servers that use the DynDNS feature to this list! This option tells eMule to connect only to servers from this list. Having this option checked but not providing valid static servers will result in eMule not connecting!

Use priority system
In the context menu of the server list, each server can be assigned a priority. The priority will tell eMule which servers to prefer when connecting. 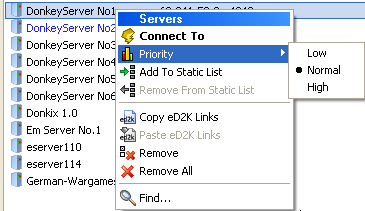